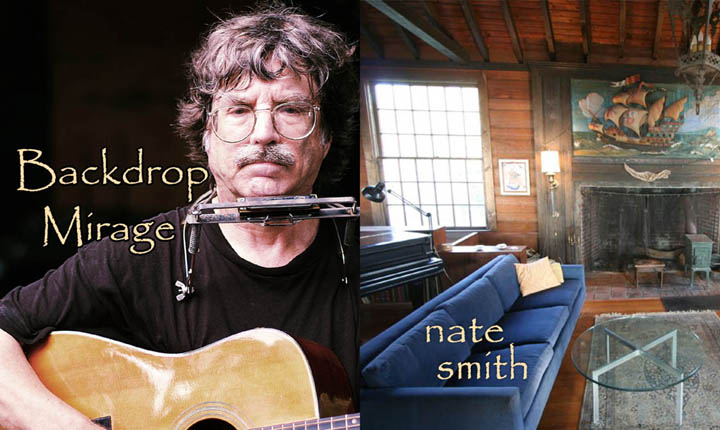 My site on Reverbnation is just getting started...

Get Band email for free at ReverbNation.com
I am on facebook/xongsmith (but no music cuz on accounta Mark Zuckerburg holdin' his fist on them copyright privileges)

Some of you can revisit my page on MySpace.com - there is seems to be compatibility problems. (Click this.)

There are 8 tunes up there for streaming into your computer: The Elevator Man & Children of the World from Backdrop Mirage and The Curious Incident of the Pizza Delivery on the Outskirts of Las Vegas & A Little Bit More & The Windowsill from Damage Control and Cant Buy Into It & The Purgatory Express & Waking Here In Your Forest from Landfall.


Where you might just be finding me these days

In the precambrian past I was known to make many appearances & occasional features at these open mics:


Tuesdays:
Heidi Jo's Open Mike at that den of iniquity, The South Gardner Hotel (SoHo!)
Occasionally Bill McCarthy's open mike at Greendale's on the north side of Worcester.


All other Fridays:
Hosted by Captain Picard, The Coolest Place On Earth (TCPOE) at the Main Street Cafe in Groton, across from The old Groton Inn. More info might be found here


Wasa Street in Gardner!!!! The newest artist conclave in Massachusetts - right in Gardner on 9 Wasa Street in the renovated church so amply & warmly welcomed by host Bethany Price. Bring a potluck dinner or toss some money into the jar. No alcohol, please. Sound by JBSound!! You can get studio quality recordings!

==> But I would be remiss not to mention the absolutely fine thing they have going on right now in downtown Fitchburg at the Chaibo's. Wonderful stuff.


Saturday nights: (except in the summer months of July and August)
Joe Bourgeois' excellent open mike at the Polish American Citizens Club, known as the PACC, off Rt. 2A in Gardner, west side.


Sundays:
2nd & 4th Sundays: The Parish Center for the Arts, hosted by John Ferullo of Two Cat Folk (John Ferullo & Betsi Mandrioli), and the PCA is not to be confused with the PACC.

My attempt to take over Jon Waterman's graphical calendar version of Sam's data
- needs work yet. Under construction. 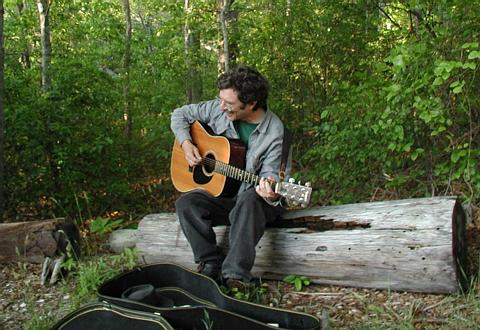 What a couple of folks are saying:

Nate Smith sings from deep down because he really means it. I like his versions of Bob Dylan's songs, and many of his originals have that Dylanesque feel. His range expands when he plays old-time banjo to accompany his old-time songs about modern times. Little guy, big soul, middle-age crazy...good show.
~ Dave Fishken of Fishken & Groves, October 25, 2004

Standing at the microphone in an old soft hat with a beat-up guitar and a neck rack harmonica, Nate Smith mixes his own songs with Bob Dylan and Leonard Cohen material. Other influences include Woody Guthrie, Joni Mitchell, and Pete Seeger. Nate is a frequent participant at the folk open mikes scattered around eastern and central Massachusetts and no Dylan tribute night would be complete without him, but he may also sing an old time traditional song with open back banjo accompaniment played claw-hammer style. His writing is playful. In the older song I’m A Sponge, he writes “Someday I might want to go away / by changing into a big stingray! / but right now I'm fine as I am / absorbing everything I can”. In 2003’s Anything, he writes, “You can be anything you want / just turn the next page, ride on a wind / let yourself go, set forth again / you can be anything you want”. Nate has one CD out*, a mostly live recording titled “Searching for Refuge”, and there are few copies left of an earlier tape called “Full Length Mirror”.
~ Geoff Bartley, November 1, 2004 *at the time of this quote 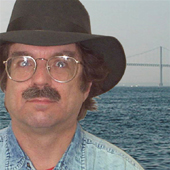 Nate Smith has been writing & singing his own songs since way back in the 60's. Originally performing in Ann Arbor, Michigan, he moved east to Massachusetts in 1970 and soon was making the rounds in Cambridge for a brief spell. Then he moved west to Fitchburg and took time off for a family. In 1999, at the insistent urging of his wife, he began singing at the Boulder Coffeehouse in Fitchburg, ably run by Keith Penniman. Soon he was back out on the circuit, mostly in the north Worcester County area, but occasionally making a strategic venture into the Cambridge scene at Geoff Bartley's open mic, along with visits as far northwest as Keene, NH. In 2003 Nate was able to compile his first CD, Searching For Refuge, with the aid of the amazing talents of soundman Don Goguen (see his site at FolkCafe.com). It features 12 originals with 8 of them recorded LIVE. Local radio station WICN in Worcester, MA, played the 3rd cut, "Goodbye, My Sweet Marie", in their regular Saturday night program, Against the Grain, hosted by Nick DiBiasio. Now he has 3 more CDs out, Damage Control , featuring 4 banjo tunes and 3 others accompanied by bass & drums, along with 7 other tracks. This CD was recorded & engineered by Jeff Root at the famous Root Cellar! The 1st song, "We're Drinkin' Down Our Coffee" has been getting some airplay on Worcester's WCUW. And recently, along with singing several Dylan tunes, Nate sang 3 of his own tunes live over the air on WCUW. Following that came Landfall . Landfall features his famous song "Purgatory Express" and was then succeeded by his 4th CD, Backdrop Mirage featuring "Elevator Man" and "Pitchblack Mornings".


The hotLinks to the lyrics are ready. The 1st one you pick may take a moment to load into memory, but then the others should be pretty quick.

My 1st all-original CD, Searching For Refuge, featuring 8 live cuts, is out of print, but will be back!

My 2nd all-original CD, Damage Control, is also out of print to return!

1. Selnty Boam
2. We're Drinkin' Down Our Coffee
3. Subliminal Criminal
4. In Otter Words
5. Craneal Activity
6. You Could Be Wrong
7. The Queen Of Hearts
8. Calamity Jane
9. The Blade Of Day
10. Rollin' Down The Blues
11. The Curious Incident Of The Pizza Delivery On The Outskirts Of Las Vegas
12. Goin' Down To The Wire
13. The Windowsill
14. A Little Bit More

....all expertly recorded & mixed & mastered by Jeff Root at the Root Cellar!

My 3rd all-original CD, Landfall, is back in print!,
also made at the Root Cellar!!

1. Little Balloon
2. Cant Buy Into It
3. Snowflakes
4. Travellin' With Ellis
5. The Rapture's Nest
6. My Secret Heart
7. Not Gonna Happen
8. The Eye Of The Storm
9. Pigeonhole Blues
10. The Purgatory Express
11. Waking Here In Your Forest
12. Tommorrow Could Be Our Day

My 4th all-original CD, Backdrop Mirage, is also back in print!,
made at the Root Cellar!!

You used to be able to hear these songs at DF-Jams.


There was a SOLD OUT single CD featuring my song Here On Red Apple Farm . It had 2 bonus tracks included - The Curious Incident Of The Pizza Delivery On The Outskirts Of Las Vegas from Damage Control and an alternate acoustic version of Little Balloon from Landfall.

I may still be able to find copies of a CD single out to support the family of one of New England's dearest friends, Mike Duffy, featuring my song The Ballad Of Mike Duffy. 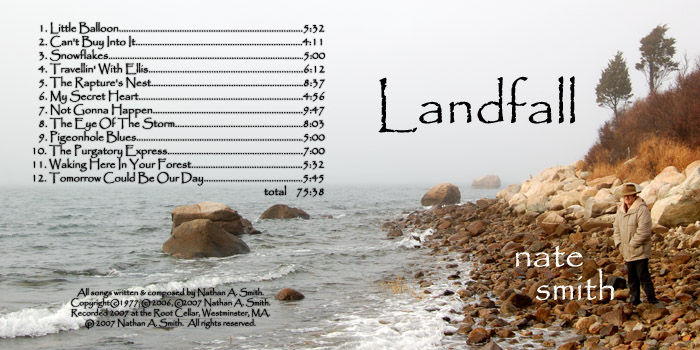 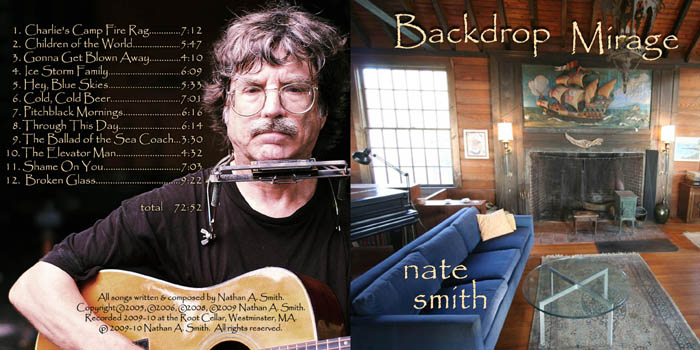 You can order copies of these at some future time by sending me email!
Or you can see me in person on the circuit when it comes around again on the guitar.
For a complete view of ALL of my lyrics, click here.

Create Your Badge
I'm not sure how this is going to work, but I am also enrolled in this: 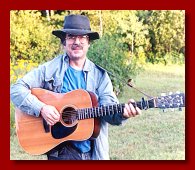